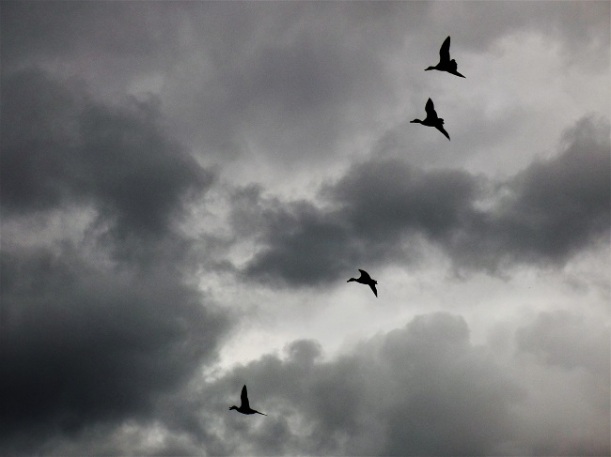 He spent the day lying in the field. Waiting.

Eventually someone would miss him, or wonder about how come he is so late.

Eventually they will think of sending someone to check.

For the moment, all he could do was gaze up at the skies, his leg in an angle that no leg should be in, and his breath curtailed to the smallest gasps as to limit the stabbing pain that traveled through him – like a snake’s bite and a red-hot poker combined – if his lungs filled up enough to move the lower part of his torso. He’d never been more acutely aware of how all joints connect.

He almost laughed at his own joke only to remember the infinite well of torture that he’s been finding over the hours he’d been this way. There was no bottom. Only crests of agony he could know and not know of, ride and fall off of, let be and let go.

In the first hour after it happened he’d been angry at himself for the stupidity of attempting to leverage boulders that should not be attempted solo. The stick, not sturdy as he’d hoped, snapped in half, sending him to the ground in an way he could not reconstruct for the blinding nausea of torment that had ensued. He didn’t know what part of his leg it was that broke, or not exactly. Raising his head even just a little led to the world spinning and a blackness closing in, and not only from the clouds that seemed to gather.

He wasn’t angry anymore. There was nothing left in him to spare on blame.

The grayness above grew heavy. It would not be long before the rain.

He’d be miserable in the muddy wet.

It would also bring people faster. They would not expect him to misread the weather. They’ll question. They’ll come.

A drop tickled his nose and he suppressed a sneeze, almost crying with desperation to avoid more pain.

A call sounded, and for a fraction of a second his heart soared. But in the next, awareness filled in: it was not a human’s.

He opened his eyes to a quartet of geese flying overhead. Wings flapping asynchronously against a rising wind.

“Fly safe,” he mouthed, eyes overflowing with misery in spite of himself. They could move. He was jealous. He was helplessly alone.

More drops fell. Tears or rain, it did not matter.

He held on to the imprint of the silhouettes against the spitting heavens.

Soon, his family will realize he hadn’t come home. Soon they’ll wonder about it enough to worry where he was. They’ll send someone.

For the moment, all he could do was breathe, and hold in all the sobs, and let the pain wash over him like rainfall.