As promised in the previous post, the video above is a recording of my virtual presentation from June 3, 2020, titled: “Does He Even Know How To Be loved?” Challenges in Adoptions of Traumatized Children.”

The hour-long presentation was requested by and offered through Haruv USA, which provides professional development and training on trauma-related topics, to professionals and interested individuals. The presentation is available on YouTube.

Feel free to leave comments or ask questions. Please note that comments are public, so if you want to ask questions more confidentially, please use the contact Na’ama Yehuda page.

The video above is a recording of my virtual presentation from June 2, 2020, about the “Impact of Neglect and Abuse on Language and Communication in Children.” The hour-long presentation is in Hebrew (no English Subtitles at present). It was requested and offered through Jerusalem’s The Haruv Institute‘s “Haruv From The Couch” initiative, which provides virtual professional development and training on trauma-related topics, to professionals and interested individuals. The presentation is available on YouTube.

For the English speakers among you, I am hoping to post a video of another presentation (on a different but related topic), this time in English, in the coming days. That presentation was requested by Haruv USA and was recorded on June 3rd, 2020. I am waiting for it to be made available. So be on the lookout for another video post!

Feel free to leave comments or ask questions. Please note that comments are public, so if you want to ask questions more confidentially, please use the contact Na’ama Yehuda page.

I am delighted to share that my book, “Communicating Trauma” has just been published in Spanish! Yay Hurray! 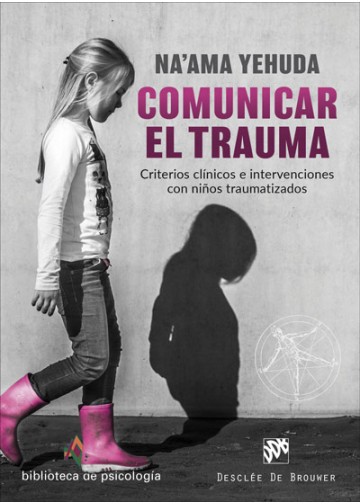 For more information about the English edition go to “Communicating Trauma” (or look under the — soon to be updated… — Books and Publications tab at the top of the page). 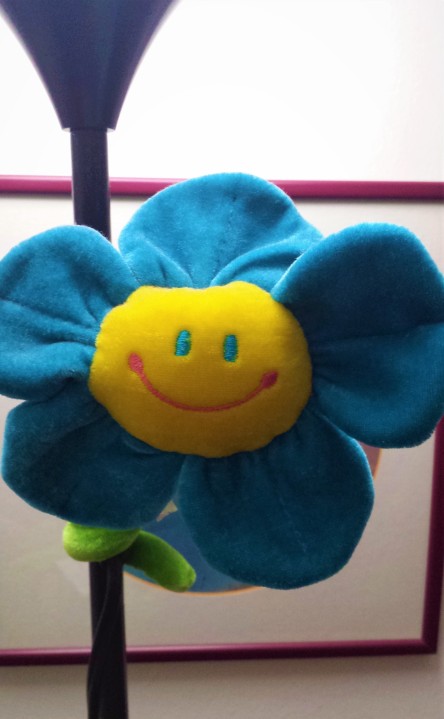 She hangs out next to the couch, wrapped around the floor lamp like a hand in a hand. She’s been there a long time. She lived on other floor lamps before this one, till their time had come and she welcomed a new one. She makes friends with them all, says goodbye to those who lost their spark. Perhaps she thinks of them, sometimes.

She hangs out next to the couch, wrapped around the floor lamp like a protective palm over a young hand. She watches little fingers wrestling beads onto threads, listens as small mouths make words out of thoughts, witnesses big hearts in tiny chests writing grand ideas into evolving minds – theirs and mine.

She hangs out next to the blue couch. She hears the unasked questions that stay behind worried parents’ lips. The questions children ask, sometimes for the first time. She understands. She does not prod. She just knows. They look for her, especially after a long break, reassured to find her there, still wrapped around the floor lamp like a comfy hug.

She’s been there long enough to find the right time to catch their eye.

With a quiet smile.

Blue Belle on her perch by the couch. Patience in her heart, twinkle in her eye.

All children want to play, including those with disabilities. However, the latter are all too often left out of playgrounds altogether, are rendered invisible to others who look through them or past them, or are bullied. This internationally acclaimed short movie, which is based on the true story of Ian, wordlessly and profoundly delivers the universal message about the inclusion and dignity to audiences young and old.

It is a must-see.

From a fabulous article about the movie from Respectability:

“All kids want to play. Kids with disabilities are no different. “Ian” is a short, animated film inspired by the real-life Ian, a boy with a disability determined to get to the playground despite his playmates bullying him. This film sets out to show that children with disabilities can and should be included.

“Ian” premiered for audiences around the world on YouTube and was broadcast in Latin America simultaneously on Disney Junior, Cartoon Network, Discovery Kids, Nickelodeon, PakaPaka and YouTube Kids Nov. 30, 2018.

“Ian” started as a mother’s mission to educate her son’s bullies on the playground—one to one. When she realized that the need for inclusion was bigger than one playground, she wrote a book and founded Fundación ian to change thousands of minds and attitudes about people with disabilities. She approached MundoLoco, a top digital animation studio in Latin America, about creating “Ian,” an animated film to deliver the message of inclusion to audiences all over the world.”

For the rest of the article on Respectability, information about the real Ian, links, and a lot more, click here: “Short film about playground inclusion wins international acclaim” 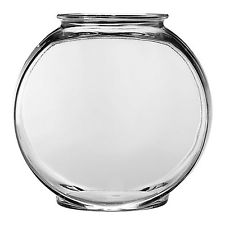 He reached into his pocket and rummaged around. “I’ve brought something to show you,” he said, eyes searching mine. “But it’s a secret …”

“Well, sort of,” he shrugged as an uncertain smile worked its way into his cheeks. “I took them to school … but I didn’t tell anyone … because we’re not allowed to … The teacher woulda’ taken them away and other kids maybe woulda’ told her or asked to see them and then she’d know …”

I hiked my eyes up and nodded my expectation.

The grin grew but it still held a sheen of sad.

He pulled his fist out of his pocket and turned it so the back of his hand rested on the table, then ceremoniously uncurled his fingers.

Four grains of rice in tiny vials, strung onto a keychain ring.

“They have names on them,” he said reverently.

I squinted and reached for a magnifying glass. Handed him one.

Our heads met over the small nest of palm and he mouthed the words, more sigh than voice.  “Fee, Fi, Fo and Fum.”

A quartet recently eaten not by a giant smelling the blood of an English man but by a feline with a swishing tail who had knocked the fishbowl over and left not one golden scale behind. 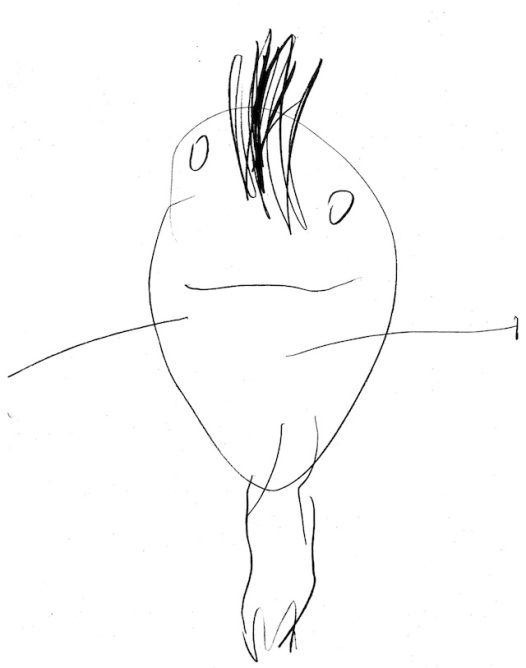 “You make a circle …” she demonstrated. “Then you make eyes and mouth and little bit of hair and hands and legs. See?”

She held the drawing up to show me. Lines for arms and legs sprouted out of the crooked circle ‘head,’ topped by a few smaller lines of a sparse mohawk.

“Then,” she planted the paper back on the table, “you go to the hospital and the doctor makes magic and it’s a baby.” 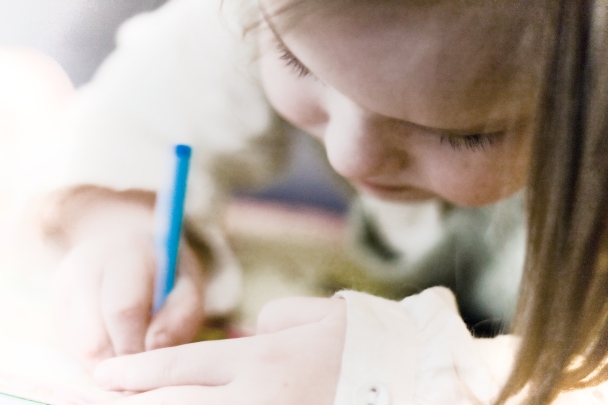 She is deliberate. She takes her time.

Each line is drawn with distinct goal. Each color chosen with remarkable concentration. Each curve labored on in exact determination.

After all, the letters aren’t ‘just’ a prelude to a word expressed. It is none of it ‘just’ idle practice …

It is her name she’s working on, a profound soul-expression. 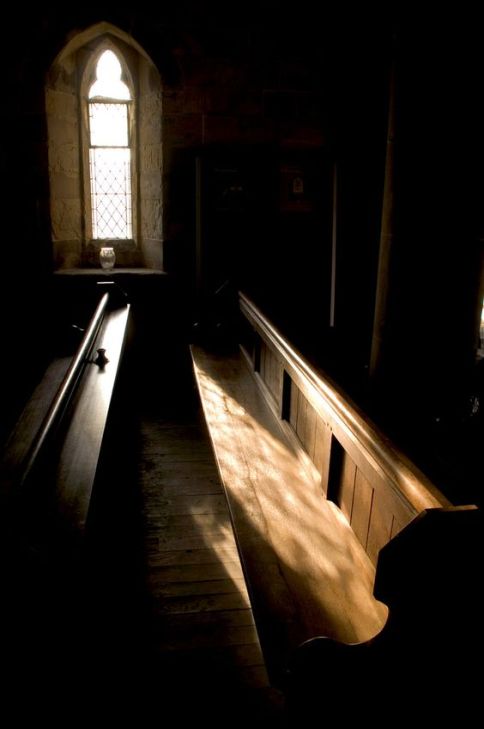 She doesn’t know who her mom is. She was left as a newborn, wrapped in a piece of old bedsheet, under a pew in the church. Or so the story goes.

She spent her first year in the orphanage. Many mewling mouths and too few holding arms. She found a way to survive.

Halfway into her second year she got picked up, fussed over with odd sounds, carried out of the room that had been her world. It was confusing. It was good. It was a lot.

She has a family now. They love her. They are patient. Most of the time. They try.

She still can’t help but wonder who she is. What made her undesirable. Why she was left, naked not only of clothes but of clues.

She still can’t help but wonder about the woman who’d had her, then left without a sound. The woman who isn’t even mist and fog of memory and yet she still is tethered to in heart and mind. Her Mystery Mom.

The five-year-old bounded up the stairs. I could hear him giggling. He stopped two steps below the landing and tilted his head at me. A brown curl flopped over one eye and he blew at it.

“When does a duck duck?” he challenged.

I grinned at his giddiness. Language for this child had just began to turn more fun than frustration, and his emerging fascination was delicious. “When?”

He chortled. “When you throw something at it! Because …” he demonstrated, bobbing so deeply that I reached over to grab his shoulder to ensure he didn’t lose his balance on the steep stairs, “duck … like this … is same as … quack quack duck!”